“Will the freshness, lightheartedness, the need for love, and strength of faith which you have in childhood ever return?”

Stephen Dedalus, Joyce’s pretentious alter-ego, undergoes a vivid transformation from a naive, susceptible infant into an imaginative, though cynical, young adult. The rhythm, one of the most powerful techniques used by the author, carefully follows the intricate metamorphosis of Stephen’s identity. The novel itself opens with a classic children’s tale about a “baby tuckoo” [ sic ], with whom the young narrator instantly identifies, acquiring the tune of the story, as if it was his own:

“O, the wild rose blossoms
On the little green place.

He sang that song. That was his song.

By including this childish passage into the beginning of the novel, Joyce instantly made Stephen the sole creator of the narrative, so that the readers may witness the gradual expansion of his vocabulary and the development of an individual style as the book progresses. Just like a cuckoo fledgling from the song, Stephen seems to be out of place in his family. His susceptibility to colours, sounds, and feelings, turns young Dedalus into a white crow among his peers (forgive these ornithological metaphors for now, we will return to them later). While other boys play soccer, Stephen is daydreaming and pondering on his place in the world. There is a memorable scene where the young boy tries to figure everything out by elucidating his location – from the objective and coherent “Clongowes Wood College” to the vague, ungraspable “The Universe” (Chapter I). This rumination serves as the birth of an artist; by putting his words into the geography book, Stephen acknowledged his own identity and artistic mission – pursuing the unknown, searching for the truth. Consequently, the boy’s mind landed on an all-encompassing and reassuring, though also terrifying explanation – religion.

“No great artist ever sees things as they really are. If he did, he would cease to be an artist.”

Childhood gradually turns into boyhood in the second chapter, as Stephen becomes obsessed with the romantic novel “The Count of Monte Cristo.” Enamoured of the fictional love interest, Stephen embarked on a journey to find its copy in reality. Eventually, he succeeded, falling for a girl named Emma. Even though they have barely spoken a word to each other, enamoured Stephen is convinced – his feeling is real and profound, “an enchantment of the heart” (Chapter V). Nevertheless, all of his thoughts and love poems are addressed to an elusive phantom, a figment of the imagination. The artist neither knows nor wants to know the object of his desire, for he is infatuated with the feeling of love itself. Therefore, Stephen’s poetic vision obscures reality, and only the farewell meeting lifts the lover’s veil from his eyes.

The romantic longing, in turn, was overtaken by “the wasting fires of lust” (Chapter II). As Stephen’s thoughts become more and more obscene, drifting from the romanticism of boyhood into youthful maximalism, the ascending Icarus faces an overwhelming cognitive dissonance. A choice between the pleasure of sin and the sublimity of religion seems impossible to make, thus throwing Stephen from the pinnacle of bliss to the pit of guilt, from one extreme to another. The ever-changing adolescent is forced into blindness again, drowning in self-loathing and utter confusion. At the end of the third chapter, the wholehearted confession had finally set his mind at peace, although the duality of human nature remained unavoidable – and so, even the strictest self-discipline had miserably failed to obliterate Stephen’s sins. Similarly to Magritte’s artwork, “Dieu n’est pas un saint,” where the heavenly creature is touching an earthly object, thus combining the sacred and the secular, Joyce’s protagonist comes to a realization – religious devotion is interspersed with carnal desires. Possessing one does not necessarily prevent the other – quite the opposite, they are two fragments of the whole, and one half would cease to exist without its counterpart. A fervent perfectionist, the aspiring artist then rejected both Heaven and Hell, dedicating himself to Art and Beauty instead. In this way, Stephen Dedalus combatted another form of human blindness – the self-denying faith.

Hello, lovely stranger! My name is Veronica Sizova, and I am a 19-year-old Russian girl, currently studying in Canada. Since early childhood, I have been mesmerized by the literary art. The words – exquisite, intricately intertwined, sophisticated, magnificently powerful and fragile simultaneously, – remind me of the oceanic waves, and poetry hides in their unfathomable depths. This place is meant to become a sanctuary for the tortured souls, aflame with a passion for literature. View all posts by Veronica 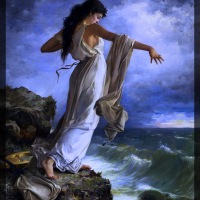 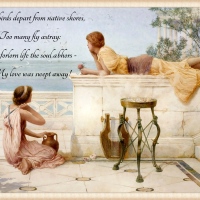 “I see nothing. We may sink and settle on the waves. The sea will drum in my ears. The white petals will be darkened with sea water. They will float for a moment and then sink. Rolling over the waves will shoulder me under. Everything falls in a tremendous shower, dissolving me.”